Over the last month we built 5 kiosks for JavaOne (1 prototype and 4 production). The idea was to show Java SE Embedded and JavaFX running on a small embedded device as a Kiosk with a great UI to help people plan their JavaOne schedule. One was shown in the Technical Keynote and the 4 production ones were then placed in the Hilton, Parc 55 and Nikko hotels of JavaOne. This is the story of how they were made…

It is normal for the month or so before JavaOne to be filled with demo building fun but up until now that had only included software development and visual design. This year we had been working with small embedded devices such as the Beagle XM, Panda ES and Raspberry Pi. As cool as they are they come as bare board which is neither practical or compelling for demos. So this year I took on the challenge of designing and building the hardware for the demo as well as software and visual design. We already had the idea of using the JavaOne schedule data set for a demo and the crazy idea of building kiosks popped up one time when we were chatting about how to use the data.

So I started in Photoshop designing the user interface for the application. Once I had a basic idea of the look I jumped into code and got a early version up and running on desktop. We already had a 22″ 3M touch screen from our 2010 JavaOne demo so we hooked that up to a Beagle XM and started getting the application to work on there. This took many rounds as the JavaFX Embedded port was very young when we started. So developing this app we helped test, debug and tune the port. Here is a pic of the very first designs, some of you may spot what stayed and what changed: 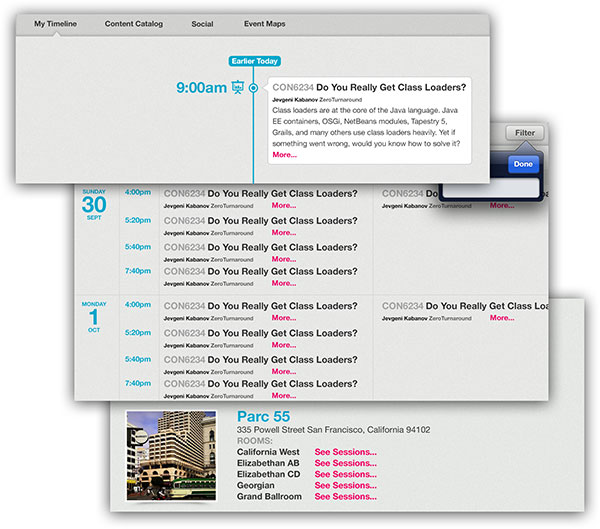 At the same time as moving the app forward I started thinking about what a kiosk might look like and how I might be able to make it with the limited tooling I have in my garage. At the point my colleague Joe McGlynn made the foolish mistake of asking if I needed any help building it. A decision he may have later regretted a little as it turned out to be a lot of hard work, oops 🙂 but he was a star and they would not have been half of what they are without his help. So to help visualize what they might look like I started modeling my design ideas in my favorite 3D package Cheetah 3D. There were at least 10 versions of the design I experimented with, here are some of the renders of those ideas:

In the next part I will tell the story of the prototype. Hope you enjoy the behind the demo story 🙂