JavaFX links of the week, August 26

A heap of great links this week, totally ruining my pre-JavaOne quietness theory, but I’m not complaining! 🙂 Let’s get right into it.

That’s it folks. Catch you next week!

JavaFX links of the week, August 19

Another week has rolled by, and so have another batch of links. This week is a little quiet, owing mainly to the pre-JavaOne quiet period that seems to happen every year (I’ve been writing this blog for so long patterns do eventually emerge) 🙂 Anywho, enjoy! 🙂

That’s all this week. I’ll catch you all in a weeks time! 🙂

JavaFX links of the week, August 11

Another week, and not surprisingly another weeks worth of Java desktop links. This week there are a number of new releases and interesting blog posts to read. Enjoy! 🙂

I hope you all found something worth reading. Catch you all again next week 🙂

END_OF_DOCUMENT_TOKEN_TO_BE_REPLACED 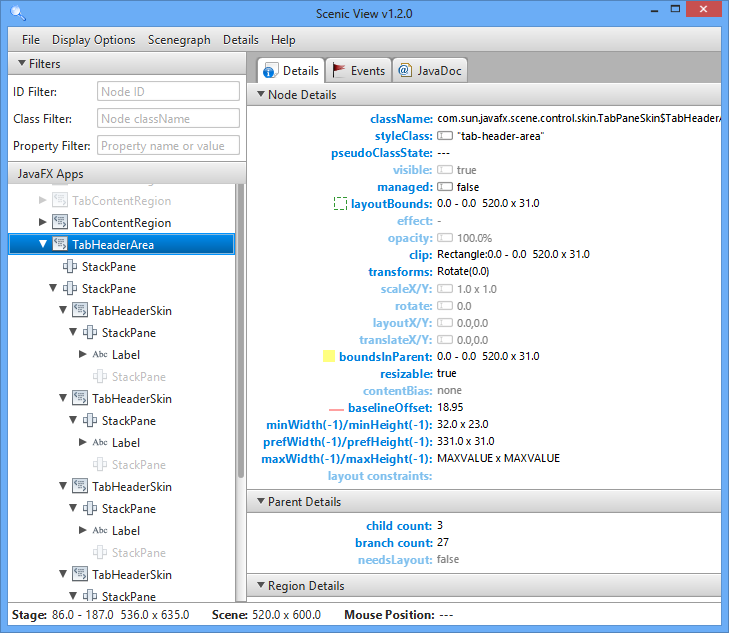 For those unfamiliar with Scenic View, here’s a short blurb: Scenic View is a JavaFX application designed to make it simple to understand the current state of your application scenegraph, and to also easily manipulate properties of the scenegraph without having to keep editing your code. This lets you find bugs, and get things pixel perfect without having to do the compile-check-compile dance.

For those of you who like pictures more than text, here is a (really old) screenshot of Scenic View 1.2.0: