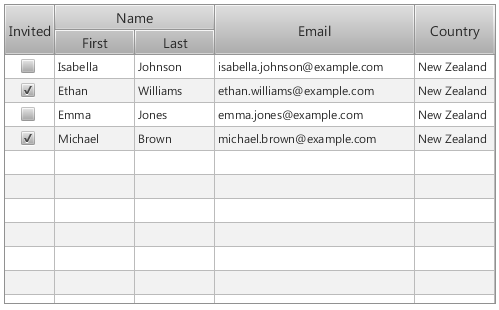 One thing I see asked a lot (either directly via email, or in the rather excellent JavaFX Forums) is why does TableView (and ListView) look like this in JavaFX 2.0:

A TableView control using default styling and API as provided in JavaFX 2.0.

END_OF_DOCUMENT_TOKEN_TO_BE_REPLACED

JavaFX links of the week, November 28

A heap of interesting links this week, so I’m going to skip the introduction and get right into it. Enjoy! 🙂

That’s all folks. Keep up all the great work and I’ll be back in a weeks time to cover everything that happens this coming week! 🙂

JavaFX links of the week, November 21

Welcome to another week! 🙂 There is a heap of good links this week – it seems the quality of blog posts is certainly increasing these days! Keep it up folks 🙂 As always, I hope you enjoy some of the links below, and always feel free to email me links to include.

Keep up the great work folks. Catch you all in a weeks time.

JavaFX links of the week, November 14

Here we go again – this week there are a heap of JavaFX links, so I’m just going to get right in to it – enjoy! 🙂

Well, that’s it for another week. Hope you found something useful. Catch you in a weeks time! 🙂

JavaFX links of the week, November 7

Another week, another round of links from the JavaFX world. I hope you all find something of interest. Enjoy! 🙂

That’s all for another week. Keep up the great work folks and I’ll be back in a weeks time to highlight everything you’ve been up to! 🙂