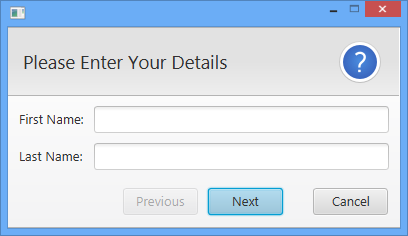 Why the delay?
This release has been brewing since 8.0.6 was released on May 29th – so basically four months. This is not typical for us (we normally have much quicker releases), but Eugene and I were both distracted on a major undertaking – elevating the ControlsFX dialogs API and implementation into the next release of JavaFX itself (it’ll be appearing in JavaFX 8u40, although the API is vastly different than what you see in ControlsFX 8.0.6). The end result is that we iterated through a bunch of API design work (see RT-12643) and none of that benefited ControlsFX, but it took up all our time.

Once JavaFX 8u40 dialogs were API complete (which was only mid-August), we developed a plan for how to proceed with ControlsFX dialogs. In essence we didn’t feel that it was wise to maintain a dialogs API in ControlsFX that was so divergent than what will ship in JavaFX 8u40. Therefore, the plan that we developed was to deprecate the old ControlsFX API, fork the JavaFX dialogs API into a new project called openjfx-dialogs, and to recreate the additional features that ControlsFX includes (but are lacking in JavaFX itself) using the new API (this includes dialogs like progress, font chooser, command link, login, etc). The end result is two-fold:

The nice thing about openjfx-dialogs is that people wanting to use the new JavaFX dialogs API in 8u20 can do so – just download the jar (or set it as a dependency) and you can use the API (and implementation) exactly as it will be in 8u40. This is great for me – it gives me more testers of the JavaFX dialogs API and implementation – hopefully you can file bugs if you run into them.

Wizard
The wizard was implemented by Eugene and myself. I think it strikes a really nice balance between simplicity and flexibility, but I am sure that over time we will continue to tweak the API as we get more user feedback. The thing I like most about the API is its simplicity. In the common use cases, you can simply specify the pages you want to show, and that’s it. Once the dialog is closed by the user (or in fact, at any time), you can query a Map to retrieve the input that the user has put into all fields of the wizard. The Wizard knows how to extract values from most commonly used controls, and if it can’t, you can easily add support for custom value extractors. On top of this, the wizard supports linear and conditionally branching page flows. Here’s a screenshot from our simple test wizard:

StatusBar
The status bar control was contributed by Dirk Lemmermann. It is normally placed at the bottom of a window. It is used to display various types of application status information. This can be a text message, the progress of a task, or any other kind of status (e.g. red / green / yellow lights). By default the status bar contains a label for displaying plain text and a progress bar for long running tasks. Additional controls / nodes can be placed on the left and right sides.

The picture below shows the default appearance of the StatusBar control:

The following picture shows the status bar reporting progress of a task:

The last picture shows the status bar with a couple of extra items added to the left and right:

Miscellaneous Improvements
Of course, on top of the major new features / changes, there is a bucket load of small improvements, including the following:

That’s all for this release – we hope you appreciate all the hard work that the team is putting in to ControlsFX, and that you might consider offering bug fixes or bug reports. If you want to get involved, check out our documentation that describes everything that you need to know to get started.