It hasn’t quite been four weeks yet, but I’m already back to announce the availability of the final release of ControlsFX 8.0.0. This release is a combination bug fix and feature release, having gone through only one (proper) developer preview release (there was supposed to be a developer preview 2 release, but due to issues deploying the build we had enough time to fix up the remaining bugs / features and now we’re at the final release! 🙂 ). A huge number of bugs have been fixed, in particular related to dialog layout. It is highly recommended that people use JavaFX 8.0 b91 or above when running ControlsFX.

For more information on what ControlsFX is, who it is aimed at, how to get it / use it / contribute back to it, you should refer to the ControlsFX page. A few things to note are:

To conclude this post, here’s a quick rundown on the new features included in this final 8.0.0 release:

Dialog ‘Command Links’ support
Command links are common on the Windows platform. The version we have in ControlsFX looks like the following:

Actions API
The newly-added Actions API is used by both the dialogs API and the ButtonBar API. It essentially abstracts away the notion of how a control is represented, instead focusing on the properties of the control (e.g. text, graphic, etc). This makes it really easy to reuse the same Action in multiple places in  your UI. We’ve also developed convenience API to convert Actions into the common UI controls (see the ActionUtils class for these methods).

Hugely improved JavaDocs
One of the goals of ControlsFX is to have high quality JavaDocs, so one of the main drivers for this release was to improve those further. As always, the JavaDocs can be read online, but they are also available as part of the download. The intention is that the JavaDocs should be the primary way of people learning how to use the ControlsFX API, so there are good code samples and screenshots of the controls in action. Hopefully this will help to get people started quickly.

Updated styling for SegmentedButton
The SegmentedButton control initially had one style, which is now called the ‘dark’ style. This style is now no longer the default, instead being replaced with styling that is more fitting with the JavaFX 8.0 Modena style. However, the dark style is not lost – it is still available to those of you that prefer it. Refer to the SegmentedButton JavaDoc to see how to switch between the two styles available. Here’s the difference: 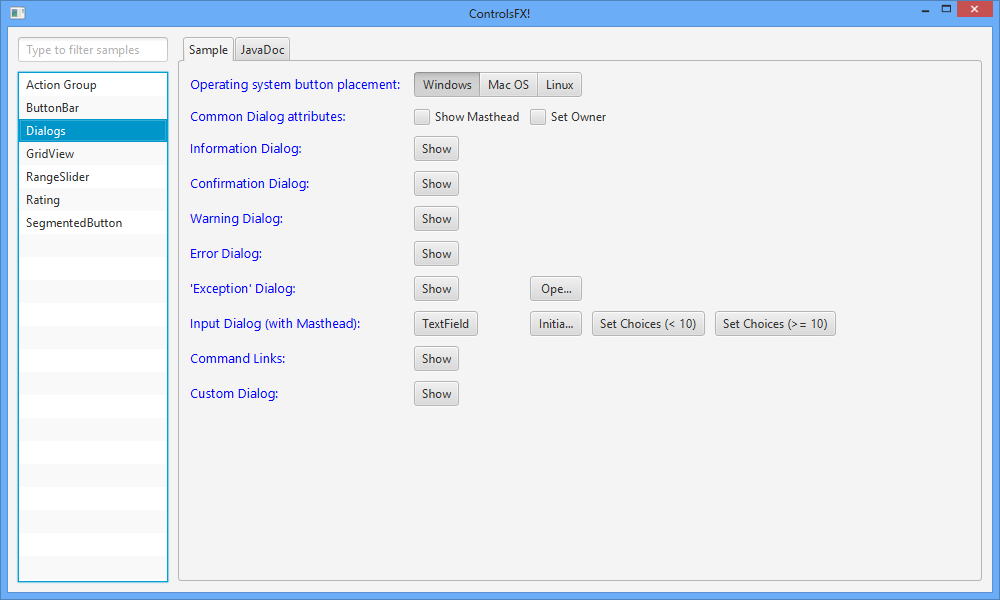 ButtonBar
A horizontal container for buttons, which automatically places the buttons in the correct position for the underlying operating system. Just annotate the buttons with their type and it’ll handle the rest!

Dialogs
A collection of pre-built, modal dialogs providing a really simple yet powerful API. Supports all manner of pre-built dialogs, and even allows for custom dialogs to be easily created.

GridView
A fast, virtualised grid container similar to ListView, except that there can be multiple cells on each row. Great for showing images!

RangeSlider
When you want a user to specify a range, right now you need to give them two text fields to type into (or two sliders). Yuck! This control is essentially the standard JavaFX slider but with two draggable thumbs on it – one representing the low value and the other the high value. Much better!

Rating
A simple control that allows users to specify a rating between zero and a maximum value. This control supports partial ratings and updating on hover or on click.